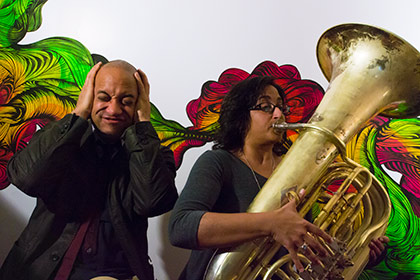 this is how we feel now

Our story starts with our founders, Josh Roseman and Srinija Srinivasan. Josh is a professional multi-instrumentalist, composer, producer and bandleader. Ninj is former Editor-in-Chief at Yahoo! and served as Board Chair at SFJAZZ.

Their backgrounds at the intersection of music, technology and culture spurred them to found the Loove, their collaborative vision for an equitable and sustainable model for creative music in the digital age.

Culture Warriors for the 21st Century

In 1995, when I joined an initial development team of just five people, tasked with building Yahoo!, we witnessed the exhilarating momentum of an epoch in which proponents of Culture commanded new technology, using it to assert cultural values like democracy, transparency, and accessibility.

This assertion of values was enabled by new Techologies, and it upended the established powers of Commerce, re-imagining business models and revamping entire industries.

"Disintermediation" soon became a new buzzword. Once stalwart industry leaders from the spheres of retail to publishing to entertainment to newspapers to travel - just to name a few - faced mortal threats from a flurry of small startups who mastered the new technologies and promoted new value systems that resonated immediately and deeply with the Culture.

So we saw that Culture can beat Technology, and in turn Technology can beat Commerce.

But it was not long before Commerce would fight back. In able pursuit of its highest value - profit maximization - Commerce inevitably began to suppress Culture. And then Commerce seized the power of Technology in order to increase productivity, improve efficiency, and scale to ever larger markets.

This shift was rapid and it was global, and before we knew it, we found ourselves praying to the God of Scale without examining the costs.

Beauty, passion, satisfaction, and now community – it’s these intrinsic human values that are at stake. In an age when everyone is a writer, everyone is a photographer, craft is quaint and artisans are antiquated.

As artists and proponents of core human values, we cannot abdicate our responsibility to return a sense of equilibrium to the equation. It's time to throw scissors, and let Culture cut through the new normal once again and restore some balance to our lives.

What Music is For

To hear some people tell it, you'd think that audiences had begun tuning out from music. But if that's true, it's not for a lack of people listening to the stuff. On average, we're hearing more music each day now than ever before. Today, music surrounds us now like an aerosol sprayed indiscriminately throughout waking life, like the pervasive background scent of a Cinnabon for a gigantic online shopping mall.

But at the Loove, we prefer to savor the stuff: to know where it comes from and how it's made, who's making it and that it is, in fact, good for us. We want to read the label. Or, better yet, to be confronted with art so real and organic that it needs no label at all. So that's what we're out to create.

This far-reaching transition is an easy one to understand. If music surrounds us like a pervasive and unrelenting ether, then it's easy for some people to imagine that it springs from that ether already whole. It's easy to forget that music and culture are acts of human labor – not just human love.

At Loove, Music is our favorite part of culture. And one of its greatest strengths is its capacity to bring us into the moment – to remind us to live in the here and now. Other art forms help us escape reality, but music, perhaps alone, makes us notice it for what it really is, in all its deep beauty, pulsing mystery and elegant absurdity.

It's easy to forget that music and culture are acts of human labor – not just human love.

It's not just us either. Ever since we sat on the cusp of becoming human, our species has valued music for its ability to bring minds and bodies together. And it wasn't developed over millions of years from the savannahs of Africa to the cement jungles of New York City just so we could sit only in isolation, piping the stuff into our brains through a scrawny little wire, separating our minds from our bodies and ourselves from our communities.

The truth is that culture doesn't happen in isolation. Culture is conversation. And that's why the Loove is here: To invite you in to that conversation.

So, What is The Loove?

One of the most common questions we get, aside from “Do you have any more coffee?”, “Can I play your Bosendorfer?”, and “ Are you sure you're supposed to be doing that?”, might be “What is the Loove?”

That's understandable. At first glance the Loove seems like a lot of things. That's probably because it is.

the Loove is a more than just a studio. It's a full-on media lab where hybrid recording sessions give way to multi-camera shoots and post-production dates; and it's an exclusive venue where artists workshop and perform in front of discerning audiences, as smart as anyone on stage.

[…] if the Loove could only be one thing, it would be “ambitious”.

the Loove is also more than just a label: It's a curatorial body that blends the ethics of an artists' collective with the lean effectiveness of clear-eyed commerce.

And the Loove is more than a web app: It's a cultural outlet and it's a set of tools – yes tools – that we develop and distribute so that others too can work on making culture both engaging and tenable.

That might seem like lot to fit into one building. But it's a focused construct, and we know just who we built it for.

We built up the Loove for audiences who've become empowered by technology, who've grown accustomed to all it has to offer, and who are now looking for a deeper connection to music and culture that's immediate, personal, and never disposable.

We built it for artists who need an unfettered way to deliver their work, but who also want that work to be sustainable. It's for performers who won't settle for anything less than seeing their creations have the time, the space and the framing they need in order to develop and grow to a point where they're capable of breathing the life back into people.

And we even built the Loove for the biggest fish out there, who need a set of tools—a living infrastructure—that protects music and culture while letting it go free.

If the Loove could only be one thing, it would be “ambitious.” We make no bones about the fact that it aspires to be a center for culture.

But it's not a center for everybody's culture – just for everybody who gets that art is an ecosystem. And that when the audience, artist and presenter are on the same page and working together, magical things begin to transpire.